Oops! It appears that you have disabled your Javascript. In order for you to see this page as it is meant to appear, we ask that you please re-enable your Javascript!
Skip to content


The pathway to a career in photography seems to be the most circuitous of all. My career was really a surprise to me. From the time I can remember, all I ever wanted to be “when I grew up,” was a singer.

I was born in San Francisco, lived in Guerneville, California, and high school in Tacoma, Washington and college at the University of Washington in Seattle. Through all those years, music and especially jazz was my major passion. I received a BA in Communications with minors in English and Music.

After graduation I moved back to San Francisco and began singing with a vocal group and working nightclubs. On our first road trip to Edmonton, Canada, I bought a Petri Half-frame Jr. 35mm camera and a light meter. I figured if I liked photography I’d buy something better.  The next step was a CanonIVs2 and a telephoto lens. Upon returning to San Francisco I purchased a LeicaM3 and the passion was further ignited.

I took the camera, developing reels, chemicals on the road trips with me in my Austin Healy in a trunk that also contained an Opemus enlarger and set up darkrooms in every motel room I stayed in. That was my schooling. Shooting, developing and printing. Looking at all the mistakes and learning from them as well as reading voraciously everything I could find. I ended up being as passionate about my photography as I was about the music. Little did I know where it would lead me.  I learned very quickly that what excited me was working with people and photographing them. 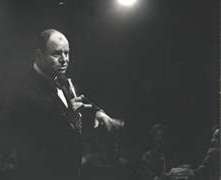 I started shooting available light performance photos of entertainers I met along the way as well as posed publicity pictures. This is Don Rickles in 1962. At this time I had no lighting equipment, so I learned to really “see” available light. From this type of photography I learned to see people’s faces, their flaws and attributes and make flattering portraits. At the same time, since there was no studio, I really learned to use the world as my studio.

In 1971, I worked at Lloyds Camera’s in Hollywood as a salesman.  It was a very difficult time.  The kind of music I did was no longer in vogue, I was married, but separated and living in a small apartment and trying to find a new career.  My apartment was burglarized; all my camera’s were stolen.  Not that I had much, but a Rollie 2.8, a Nikon Ftn and three lenses and my Leica M3.  I was devastated.  The next morning, I received a notice in the mail that I had won second prize in the Nikon International Photo Contest and I would receive a silver medal, a Nikon camera and any lens of my choice.  I chose an 85mm f/1.8 as it would do most things in portraits and low light levels.  I guess I was destined to be a photographer.

In 1972 I had a career change, becoming the photographer/art director at Motown Record Corp. when they moved to Los Angeles. In the three years at Motown, I honed my studio skills which included studio lighting, concert work and all the other skills involved in producing a majority of the album covers. I was able to manipulate the images in the darkroom becoming proficient in color printing, black and white special effects, layout and design and of course work with some very special artists along the way. 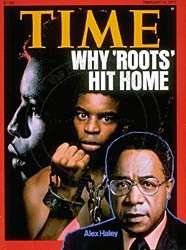 During the time I was head photographer at ABC Television, I was able to create many images for different shows and events. The Time Cover for Roots was my favorite. The photo of Lavar Burton is a double exposure, done in the camera by rewinding and re-exposing the film. My portrait of Alex Haley was stripped in by the magazine. After three years at ABC, it was time to move on. I opened my own studio and from 1979 to 1989 photographed TV Guide covers and articles as well as travel work for Signature Magazine.

I had a chance to do fashion as well and in 1989 moved my studio to a much larger space in the Helms Bakery Complex. I worked there until 1994 when my lease was up and I realized I no longer needed a big studio. One of the lessons from the recession was that you could rent any size studio you needed. I began shooting much more on location for television and film as well as corporate portraiture. An interesting sidelight to the Helms studio era, was the co-creation of the Jazz Bakery. I had a Steinway piano in the studio and soon began having friends over to play. I contacted Ruth Price, a woman who was booking and singing in clubs around L.A. and we began doing jazz concerts in the studio. I began singing again and recording a CD.

The Jazz Bakery moved its location after my lease was up and is a well-established jazz venue in the national jazz scene.  I reinvented myself again as a photographer, this time joining the International Cinematographers Union and working again on film and television sets.

In January of 2000, I found myself back involved in music, this time as a booker of talent in the Los Feliz/Jazz Spot, a restaurant owned by my friend Rick Clemente.  I also continued singing occasionally at the Jazz Spot.  By Feb. of 2001, the Jazz Spot was well on it’s way to becoming a nationally recognized jazz venue and my life made another turn.

In 2001 I left the Jazz Spot and relocated to Ketchum, Idaho where I live most of the year.  I also have a small studio in Los Angeles.  One of the amazing things about photography is that when you first create a photograph it has a life, but then after many years what is in your archive begins a new life and value.  I’m in the permanent collection in the Smithsonian Portrait Gallery and their book “American Cool,” from the exhibit in 2014.  My current personal work is portraits produced in the 8×10 format with a Sinar P2 in black and white.  The 8×10 negatives are developed “old school,” and then scanned and printed.

Jim Britt’s early career was spent singing in jazz clubs across the United States. It was here that he first developed an interest in photography. He soon found himself setting up a portable darkroom in motel rooms.
In 1969, with many jazz clubs struggling, he retired from his singing career to concentrate full-time on his new passion for photography. He began photographing and designing album covers for Motown's top artists.
In the 1980s Jim began to work as a highly in-demand editorial and commercial photographer, moving away from music, aside from the occasional concert.
Jim's work is represented at Rock Paper Photo where it sells as fine art. He's also in the permanent collection in the Smithsonian Portrait Gallery and their book “American Cool,” from the exhibit in 2014.